Somewhere I have a cassette recording of me as a little kid singing a church Primary song that repeats the words, “It’s autumn time, it’s autumn time,” with the note going up on the first syllable of “autumn time,” and then down on the next two. In the recording, I stretch out the first syllable of the word autumn, and then crash down on the second and third syllables. (I hope I haven’t lost that cassette, and that I can get it transferred to a different medium). Anyway, now every fall I have to sing that song that way.

We had a pretty good snowfall last weekend and it has not all melted off, but, in the spirit of always being at least a half-a-season behind, here are some of our family’s recent autumn-time observances.

When they were making roasted pumpkin seeds the other day, Mabel’s friend’s family gave her some large pieces of pumpkin shell. She and Dean cooked them and pureed them and made pumpkin muffins, pumpkin soup, and also froze a bunch of cooked pumpkin for future use. 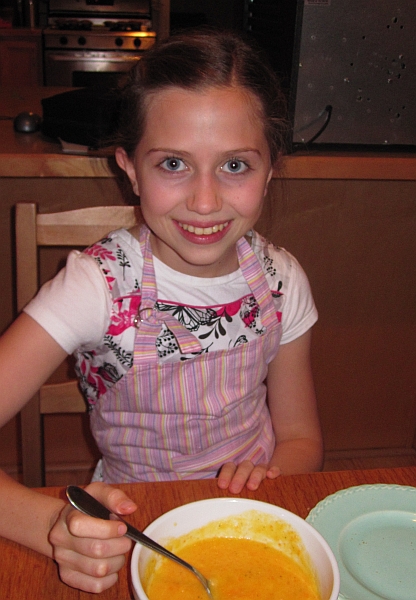 I was at physical therapy yesterday morning (yes, I’m still going three times a week, for the continued stiffness in my wrist–and yes, it’s starting to feel like I’ll be doing this for the rest of my life) so I couldn’t do Henry’s and Rose’s hair for “Crazy Hair Day” at school. I like how Dean did their hair, other than that they look more fabulous than crazy. We might have to start doing their hair this way more often.

A few years ago when it was a fight just to get Mabel’s hair brushed, I wouldn’t have foreseen that someday she would want me to do her hair. But these days she often wakes me up to do her hair on the days when I don’t have physical therapy. I’m not even very good at it–but she and I both liked this style that I came up with on Sunday, and repeated today:

Last night for family home evening, we chose this craft for our activity (we chose it from among several that Mabel found online). We didn’t have matching pipe cleaners for the stems, so we made the stems from paper. And we used scrapbooking paper instead of construction paper. We’ll use them to decorate for Thanksgiving.

Hazel just told Dean “When I have my wedding party, it’s going to be a-diculous, because I’m going to trick everybody.” But when she heard Dean telling me this, she said, “At my NEW wedding party, I’m not going to trick anybody.” When I asked if I could push her headband up higher on her head, Dean said, “She likes to wear it more like a crown.” Hazel said, “Actually it’s a REAL crown.”

Hazel’s been obsessing about her “wedding party” for a couple of weeks now. It’s going to be held at her friend’s house–which has a certain logic, since the last party she attended (a birthday party) was there. As is true for most large wedding parties, the identity of the groom seems to be only a minor consideration–in fact, once she was informed that she couldn’t marry her mom, she decided she’ll just marry herself. Every day she chooses her outfit in anticipation of the big event. It’s going to be the event of the century–and I’m sure our neighbors will be happy to host. 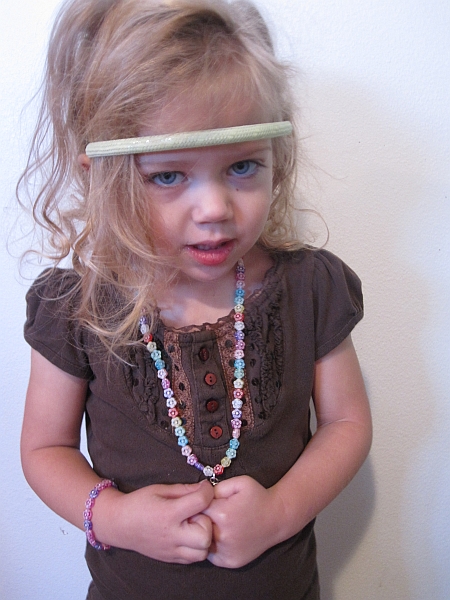 When I re-strung Hazel’s broken necklace from the other day, this time I used some flower beads she’s been obsessing about for weeks. She’d been smuggling the beads out of the drawer in my sewing room, and I would find the little bags of beads in her bed or wrapped in a blanket or cached in a little purse. (I don’t know why it didn’t occur to me to use the flower beads in the first place.) Anyway, she loves this second version of the necklace even more than the first one. At first she wanted me to use only purple and pink beads, like in a bracelet I’d made for her, because purple and pink were her favorite colors. But when I explained that I wouldn’t have enough of the purple and pink for a long necklace, and needed to use more colors, she solved the problem by deciding to have a larger set of favorite colors. So now if you ask her what her favorite color is, she’ll tell you it’s all the colors of the beads in her necklace.

I’m glad, because this will give us more flexibility for her wedding party decorations.

This was my attempt to regain sovereignty of my desk. I’m tired of the Post-Its being used up in non-note-posting purposes, and I especially hate my kids’ habit of tearing the stack apart and restacking the segments with the adhesive strip oriented in all different directions.

Although this was a valiant attempt, it’s not working–I keep finding the top note removed and set to the side. Nobody has confessed, so either the culprit is illiterate, or the vandalism happens while the kids are distracted and not even aware of what they’re doing. My theory is that they’re all guilty.

HA! Just this moment Hazel walked up, tore the top note off, and tried to take another. I stopped her–so now she says she’s not going to be in this family any more. Well, at least that will save us on wedding party costs.

This entry was posted in Crafts, Kid Crafts, My kids actually are funny (and sweet and wonderful), Parenting. Bookmark the permalink.