I have some cheap silver plate and sterling silver jewelery that’s become very tarnished, and in the past I had searched online for how to polish it.  I had seen an at-home recipe for an electrolytic solution, but was afraid it would damage my jewelery by removing some of the silver.  Today after researching it some more, I learned that paste silver polish also removes some of the silver, and of course it’s very hard to get into the tiny cracks of detailed jewelery with paste polish, so I decided the immersion recipe would be easier and I had nothing to lose.

I can’t remember which site I used for my instructions, but you can find many by searching “recipe for cleaning silver jewelery” or similar searches.  For most, you either use an aluminum pie dish, or line any dish with aluminum foil, put some salt and baking soda in the dish, pour in very hot water, and immerse your jewelery.  Just now (after the fact) I found one recipe that has you line a pot with aluminum foil and cook the jewelery at a (very) low boil, later straining it all through a sieve so as not to lose your jewelery, and I think if I did it again I would do it that way, because my process seemed to stop working as soon as the water cooled.  Since the water cooled very quickly, I kept having to boil more water and add new foil and ingredients.  I was boiling the water in a 2-cup Pyrex measuring cup in the microwave, so it only took a few minutes, but that still adds up when you’re having to do it many times.

Here’s a photo of the whole thing mid-process:

Apparently what happens ( I’ll have Dean check my science later to see if I’ve got this right) is that the tarnish on your jewelery is a silver sulfate, and when you create the electrolytic solution with the hot water, salt, and baking soda, the aluminum bonds to the sulfate, removing it from your jewelery.  I decided that I could see  the reaction happening when very tiny bubbles would rise off of the jewelery.  Some sites say that your jewelery will get cleaner the longer you leave it in the bath, but I don’t think that’s true, or anyway it looked to me like the reaction slowed down to almost a standstill as soon as the water cooled.  When I called Dean to tell him what I was doing, he asked me if the aluminum became pitted, so I checked, and sure enough, it was covered with tiny pockmarks.  Also, as the reaction works, the solution gives off a strong sulfur smell (like rotten eggs). 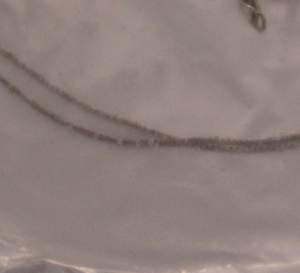 Since my jewelery was very tarnished, I repeated the process several times (until I got bored, and Hazel woke up from her nap).  I added fresh foil, baking soda, and salt each time, although I don’t know whether that helped or whether just adding fresh boiling water would have had the same result.  If I try the boiling method next time, I might try just adding strips of foil to the mixture, which is another idea I discovered too late to try it.  It also seemed to help when I dumped extra baking soda right on top of the jewelery right after adding fresh boiling water.

Overall, I was happy with the results.  My cheapest jewelery did worst, and I think that some of the discoloration I couldn’t remove was where the silver plating had already been rubbed away.  It turns out I’m no better at photographing jewelery than other subjects, so these photos don’t really do justice to the transformation.  A couple of my favorite necklaces that had been almost completely black now look almost new again, so it was worth the time to try this. 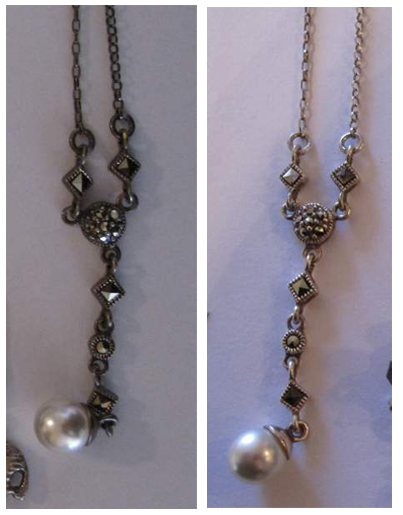 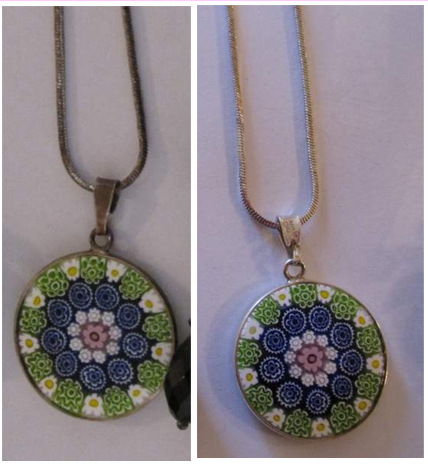 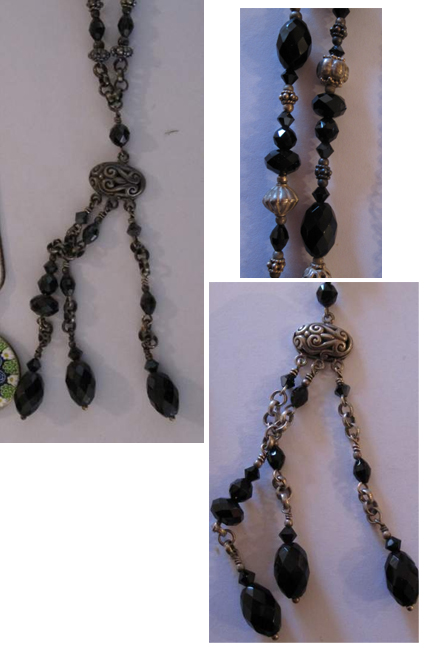 Update:  I forgot to say that if your jewelery has intentional oxidation for an antiqued look, this process could remove the antiquing.

This entry was posted in Tutorial and tagged cleaning silver, polishing silver. Bookmark the permalink.